Spain vs Netherlands: The Dutch get their Revenge

I like Spain. I know a lot of Barcelona fans that won’t support the Spanish National Team (mostly those living in Barcelona) due to political reasons. The Barcelona-Real Madrid Rivalry runs that deep, its not just about football. Since I was little I’ve always enjoyed possession football (or Tiki-Taka), so I naturally enjoyed watching Spain play.  At the 2010 World Cup held here in South Africa, I had the good fortune of acquiring TST (Team Specific Tickets) to follow Spain through the tournament. It was a great experience. So seeing them be torn apart, demolished – whatever you want to call it, it was brutal.

The Problems up front

Vincente del Bosque has for years now had the problem of reliable strikers. World Cup 2010 and EURO 2012 saw him deploy the false 9, a tactic that worked, because the squad had depth. With Diego Costa opting to play for Spain over his homeland Brazil, many hoped that he would be that long awaited for out and out striker. Well,  Costa was a disaster. In the first half he had some good chances, which he failed to convert. Xavi, Iniesta and Silva’s beautiful passes were wasted. He looked out of place in this Spanish side. We have to remember that the core of this side has been playing together for over 6 years; they know each other better than most club teammates know each other. Costa has been training with this squad for a few weeks. He did “win” a dodgy penalty for Spain in the 25th minute, which Xabi Alonso converted to put Spain in the lead.  A great through ball from Iniesta in the 42nd minute gave David Silva a chance to make it 2-0, but his chip found the keepers hand. Special mention to be made of Jordi Alba who did well in the first 45 minutes, playing the ball forward down the left flank.

Daley Blind was phenomenal. He was problematic for Pique and Ramos and provided the cross for Van Persie who scored a beauty of a header to put the Dutch back in the game just before halftime.  Pique & Ramos were shocking to say the least. If the Dutch first goal wasn’t enough to prove how shaky the two of them were, what followed in the second half was a pure abomination. The two center backs seemed to be off-key, leaving the aging Casillas vulnerable. The grit and physical dominance of Carles Puyol was missed.

If Spain looked comfortable (but not convincing) in the first half, Oranje were in the second half, a team possessed. Blind was again instrumental in the second goal, crossing to Arjen Robben who out-footed Pique and Ramos and slipped it past the sluggish looking Casillas.  Everytime Spain tried to regain some composure in the midfield they were let down by both the lack of a decent strike force and the disaster happening at the back. A free kick from Robben left Casillas confused and De Vrij scored a rather comincal goal– it appeared that he headed the ball against his own foot to put the Netherland 3-1 up. And as if Spain’s night couldn’t get any worse, in the 73rd Casillas literally pushed the ball onto Van Persie’s foot, who netted in his second of the night and Holland’s 4th (where were Pique & Ramos?). The final nail in the coffin was when Robben danced his way past Pique and Ramos to sneak in the Dutch 5th. World Champions defeated by a far superior team. 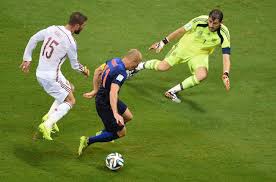 The Dutch exposed the Spanish defence

People are questioning whether del Bosque is choosing his side on loyalty more than anything else. An obvious example is Iker Casillas. Yes, “San Iker” has won his side three major international trophies. He was fundamental in their victory 4 years ago, he executed a few great saves in the final, no-one can take that away from his. But when a player’s form starts declining, you have to put in the best man at the time, that’s football! This was seen in Mourinho’s last season with Real Madrid, when Casillas was relegated to the bench.  Torres & Villa weren’t deemed good enough to start, so they were benched with Costa chosen ahead of them (which turned into a disaster). So why wasn’t Reina given a start? Judging from his season with Napoli, he’s clearly been in form.  Del Bosque’s loyalty to his (aging) squad that won all, and his his reluctance to play new blood proved to be deadly for him.

The Dutch displayed a fighting spirit. Van Persie must be commended, leading by example and rallying his team. Whereas, after the Dutch took the lead, Spain seem to lose the plot. Instead of digging deep to pull themselves out of the mess, they resigned themselves to defeat. I wonder if they even have the desire to win anymore, having dominated world football for 6 years and won back to back tournaments, some of the veterans on the team didn’t seem to have the motivation that we saw in the Dutch. But the Question is: can Oranje carry this momentum for a potential 7 more games? In a month long tournament, peaking at the right time is essential and have they peaked too early?