I’m not going to do a match report, because with a record viewership of over 1 billion people worldwide, I’m assuming you’ve watched the FIFA World Cup 2014 final. We all know the result, we’ve all seen/heard about Mario Gotze’s masterstroke. So instead I’m just going to focus on some talking points that have risen as a result of the game: 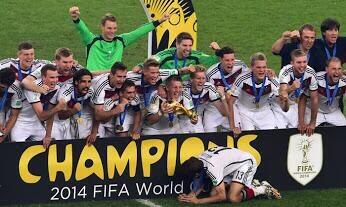 I’m still trying to figure out what Thomas Muller is doing in this pic. Any ideas?

Its telling that the last three World Cups have been won on a collective team effort rather than individual brilliance (Italy 2006, Spain 2010, Germany 2014). Don’t get me wrong, Gotze’s goal was exceptional, but it was the work of a well oiled squad that got them to the final and held off Argentina. Germany were undoubtedly the best team this world cup (comparisons been made to well engineered German machinery) .

Germany may have won, but that’s not to say they were outplayed. Argentina did well defensively for 113 minutes until Garay left Gotze unmarked. But what will be giving the Argentinians sleepless nights were the missed chances. Three come to mind: An early, uncharacteristic mistake by Toni Kroos, who headed the ball directly to Gonzalo Higuain, went wasted. Higuain had an open goal chance with just Neuer to beat, all he had to do was keep calm and score. But instead he shot too wide, much to Toni Kroos’ relief. The second incident was a goal that Higuain scored, and celebrated wildly, only to be called offside. The third was a sitter that Palacio should have finished off, but instead he took a shot as ridiculous as his rat tail.

The internet has gone ape over this. Many saying that Messi does not deserve the Golden all award. That its all a FIFA conspiracy. That he’s sponsors ADIDAS swindled the vote. While nobody loves a FIFA related conspiracy more than I do, Messi is not the worst choice. Lets look at this objectively. The Golden Ball is for an outstanding player. It celebrates individual talent and is usually awarded to a player who single handedly takes his team to their highest point (hopefully the final). SO… while many were calling for Thomas Muller and Toni Kroos, I think neither of these players performed outstandingly against their colleagues. For all the goals Muller scored, Germany didn’t really need them. Against Portugal and Brazil anybody on that German team could have netted. Whereas Messi was solely responsible for his team getting out of the group stages, a time when their defense was still not 100%. He was also the Man on the Match against Switzerland in the round of 16 – setting up di Maria’s goal. He also provided for Higuain against Belgium in the quarters. Still not convinced? I found this comparison on Twitter: 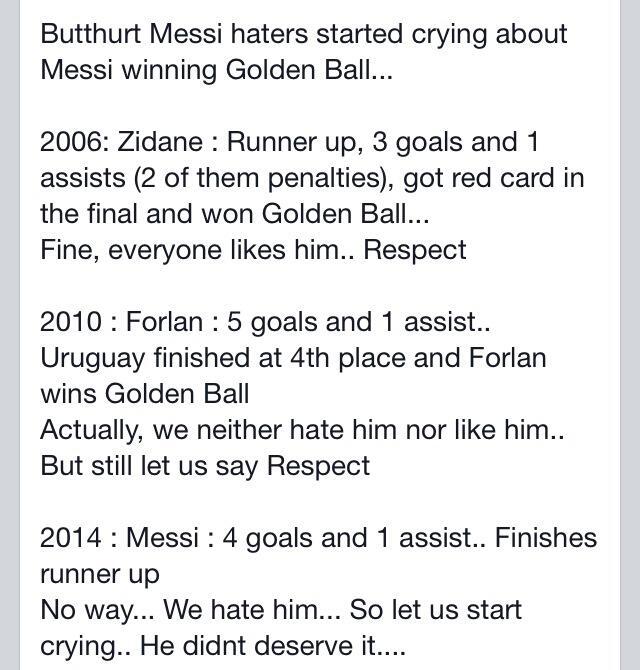 A comparison of the last 3 Golden Ball winners (Via @Semprebarcaa)

4) Can we take a moment to appreciate Pep Guardiola?

Why appreciate a coach that didn’t even feature in the World Cup? Here’s why: Back in 2010 when Spain lifted the trophy, it was a Spanish team made up of 7 FC Barcelona players – the backbone of Espana. The influence that Pep Guardiola had on his players seeped into the national team. . Now, 7 World Cup winning German players play under him at Bayern Munich. Its no coincidence, the mans influence is paramount. Who else saw glimpses of Tiki-Taka in this German side?