Inter vs Barcelona
Eto’o vs Ibrahimovic?
Mourinho vs Guardiola?
“Mouthwatering” is the only word I can use to describe this clash. The biggest names (and egos) face off tonight. The hype that has been surrounding this game has been immense. With the clubs biggest stars moving in opposite directions, it was as though fate brought them together in group F. Its actually really weird how these two clubs have overlaped with one another in recent times. Not only did Eto’o and Ibra swap over, lets not forget Maxwell was brought in from Inter to reinforce Barca’s defense, while Thiago Motta joined the Nerazzuri from Barca. When Bacrca was looking for a new coach at the end of the 07/08 season, Mourinho was a strong contender for the job, but evenutally Barca settled for Pep and Mourinho took up the post at Inter.

This fixture has become somewhat a war of words between the respective parties but especially from the Eto’o camp. He will be looking to prove to his former coach that Barca was wrong to sell him.

I don’t like to think that any one entity (player, coach, director etc) is bigger than the club. As Luis Figo (who plyed for both Barca and Inter) said recently “Inter-Barca is more than Eto’o-Ibrahimovic.” And that folks is the true story. While Ibra and Eto’o are both more than cabable of winning matches, its going to take a team effort for either of these sides to come away with a win.

Inter will have the home crowd advantage, and I’m really curious to see how the Inter fans welcome Ibra back, he was a real crowd favourite. They have assembled a strong side, they have a clever manager, and they’re in great form. The Serie A champions will want to start their quest for their their third champions legue title with a win. Although they’ve enjoyed great sucess domestically, they have’nt won the champions league since 1965.
Mourinho announced his starting XI: Cesar, Maicon, Lucio, samuel, Chivu, Zanetti, Motta, Stankovic, Sneijder, Milito, Eto’o.

Barcelona have gotton off to a winning start this season. They’ve already won two titles (the Superaopa de España and the UEFA Super Cup) in their bid to win 6 titles this season. They played the most attrctive football last season, and it yielded results, winning the Treble (La Liga, Copa del Rey and Champions league). New signing Chygrynsky will not feature tonight as he is cup tied to Shakhtar Donetsk.
Possible Starting XI: Valdes, Alves, Pique, Puyol, Abidal, Xavi, Toure, Keita, Messi, Ibra, Henry
There’s immense quality in both these sides, but I feel Barca may just have the edge. Messi and Xavi are the two best players in the world at the moment, and Inter will have to  contain these two players.

Zizou…The Greatest of all Time

When the subject of the greatest footballer of all time crops up, people are usually divided between Pelé and Maradona. But growing up in the 90’s and having nothing but grainy videotapes too watch of these two South American giants, I can’t really choose which of the two were greater. For one, they plied thier trade in different eras of the game, and secondly, while Maradona showcased his talents in Europe for a chunk of his career, Pelé did not. This suggests that they each had to strive under different conditions and different styles of football (one cannot deny that there are vast differences between the South American game and the European game).  For me, the greatest footballer of all time is Zinedine Zidane. He was the reason why I fell in love with the sport, and in my opinion, he should be remembered in the same breath as Pelé and Maradona.

I was only 10 years old when he scored those two amazing headers in the 1998 World Cup Final against Brazil. Two years later he dazzled the world in EURO 2000, and picked up the Player of the Tournament award. He joined Real Madrid in 2001 from Juventus for the then world record of €78 million. He proved his worth by scoring a left foot stunner of a goal in the Champions League final 2002. Having won all the top honours at an international level (FIFA World Cup 1998, EURO 2000) and several individual honours, he announced his retirement from international football following France’s disapponting EURO 2004.

….Above: Zidane’s left foot, volley in the champions League Final 2002….
…Below… FIFA World Footballer of the Year..3 times… 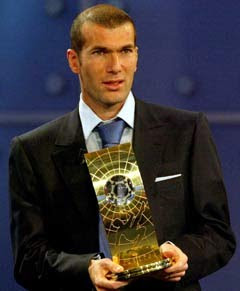 He was convinced out of retirement by French coach Raymongd Domenech. He then worked his magic through the 2006 World Cup to help France reach the final.  I’ll never forget how he tore apart Brazilian and Spanish defenses with ease! People compared him to a “ballerina,” which may seem like a bizzare comparision to make to a 1.85m (6ft 1in) man, but its true! He had a certain grace about him. Once in possesion, defenders had a hard time getting the ball off him. Not only because it seemed as though the ball was attached to his foot, but also because he was a very big, bulky guy. Physically difficult to tackle or bring down. He was the perfect footballer.
Regarless of how his career ended (The headbutting incident and sendoff), he won everything there was to win at an international, club and personal level. He delivered on the worlds biggest stages, on the grandest of occasions, against the fiercest of rivals- world cup finals, champions league finals etc. He was a matchwinner. So, when people ask me who I think is the greatest footballer of all time, I am not divided on that issue, for me there is only one: ZIZOU

….Zizou with the World Cup and EURO Cup….

Champions league football is back!
Match day 1 will fall on the 15th and 16th of September.

Group B : Wolfsburg vs CSKA
Besiktas vs Man Utd.

Atletico Madrid vs APOEL
Juve-Bordeux….both teams are unbeaten in their respective leagues..
Juve  finished Serie A in second place last season, and didn’t make it past the round of 16 in the champions league. They will be looking to better those results. Alessandro Del Piero (pictured) is back from injury, but is not likely to be playing as he is not 100% fit. Cannavaro is set to make a return after being rested against Juve’s 2-0 win over Lazio. Big injury news is that summer signing Diego is out for 2 weeks after picking up an injury over the weekend. This is coach Ciro Ferra’s first champions league match and he’ll be wanting to walk away with 3 points.

Bordeux topped the French League last seaon but didn’t advance past the group stage in the Champions league, they had finished 3rd in their table. They have a formidable pair – playmakers Yoan Gourcuff and the Arsenal-sought Marauanne Chamakh. Coach Laurent Blanc will be wanting to capitalize on their recent run of good form in Ligue 1 by notching up an early win in the Champions League. They’re looking in good shape but I feel Juve may have the edge in this one.

The Champions League trophy is the title that Chelsea will be itching to get their hands on. New coach Carlo Ancelotti seems to have breathed a new lease of life into the Blues. They are unbeaten in the Premier League, and they’ve been looking more disciplined and together this season. However, their strike force will be led by Anelka (left). Didier Drogba will serve the first of his 3 match bans for misconduct in “that”semi-final against Barca last season. Bosingwa will also sit out this one for a similar ban imposed on him. But The Blues are not without talent, as Ancelottic has Belletti or Ivanovic at his disposal to fill in the Right Back position. Carvalho is set to return to the team, while Deco    and Joe Cole are likely to be left out.
PORTO
Coach Ferrira will rely on newcomer Falcao, who has scored in all 4 of their league matches this season. He also has options in the form of Hulk, Cristian Rodriguez and Mariano Gonzalez. I feel that Chelsea at Stamford Bridge is going to be too big a task for Prto. My prediction: a Chelsea win.

Real Valladolid hosted Valencia. Los Che dominated the match from start to finish. Silva and Villa looked as formidable as ever, exploiting the gaps in Valladolid’s defense, they both found the back of the net.  final score 2-4.

So this is my first blog post! I decided to start this blog because of increasing excitement to the build up to next years Fifa World Cup, which is going to be held in my own backyard.
The big news of late have been the WC qualifiers that took place last week. With Portugal and Argentina left in a bit of trouble. It really saddens me to think of the world cup without two of the best players in the world!  But at the same time, every team has to earn the right to be there and Argentina especially have not been performing well. But with two games still in hand, qulaification is still possible.

Onto club news now..
the EPL saw some pretty big showndowns this weekend and with the log starting to take shape, the big names needed big wins.

Liverpool saw off Burnley in style with a hatrick from Benayoun in 4-0 win. The good news for Liverpool fans, Skrtle is back from injury, but he was not at his best. Lets give him a week  or two to ease back into it.

Benayoun proved his worth as he stood in for Mascherano who was still away from international duty.

Manchester United came back from 0-1 down and secured a convincing 3-1 win over Tottenham.
A last minute stunner from Malouda saw Chelsea beat Stoke 1-2.
Manchester City hosted Arsenal in what was the match of the weekend. Both teams were stretched and determined to not loose possesion. An early own goal from Almunia saw the balance tip in The Citizens favour. Van Persie equalized in the second half, but City put in two more in quick succesion. Bellamy and Adebayor struck in the 74th and 79th minute. With Wright Phillips netting one in, Rosicky’s 87th minute goal wasn’t enough to secure the Gunners the 3 points. Final scorline: 4-2 to City.

Week 2 of La Liga saw Espanol host Real Madrid. The big surprise here was that Ronaldo was left to warm the bench. He did make an appearance on the 66th minute and scored from a beautiful pass from Guti. final score 0-3.
Barcelona travelled to Madrid and saw off Getafe. The first half was a lifeless performance but Messi and Iniesta were brought on in the second half  and the game immediately transformed. Ibrahimovic scored the first and set up Messi header. The Ibra-Messi partnership is looking like it could be a great one! Final Score 0-2